The short-term impact of personalised formal care on primary carers: The case of the Australian National Disability Insurance Scheme

Previous Next
The short-term impact of personalised formal care on primary carers: The case of the Australian National Disability Insurance SchemeLidia Engel2021-11-22T02:44:08+00:00

If the National Disability Insurance Scheme (NDIS) implement policies to provide support to carers and promote greater work flexibility, then carers may both work and care. A study by Bernice Hua Ma from Monash University and colleagues, looked at the impact of the NDIS on the formal care use and the primary carers outcomes including caring hours, employment and social participation and found the burden on carers can be reduced by increasing support. The study also found there are disparities in access for those with a significant disability who have been ruled ineligible and their carers.

The NDIS was established in 2013 to provide more personalised services to people under 65 years old with significant and likely permanent disability compared to those services available prior. Up until 2021, there were about approximately 450,000 people with disability receiving support on the NDIS. However, this number represents roughly only one third of the total population of people with profound or severe disability. Implementing the NDIS meant not only additional funds but also a re-allocation of public funds from National Disability Services (NDS) and state or territory-based disability programs that potentially supported a wider population of people with disability.

The study explored the impact of the NDIS not only on the people who receive it, but also those with a significant disability who have been ruled ineligible or who have not applied for access to the NDIS and their carers, by comparing over time areas and age groups those who had early access to the NDIS to those areas and age groups where the NDIS was still to be rolled out using data available from the Survey of Disability Aging and Carers (2015 & 2018).

Family and friends play a critical role in caring for people with disability. Meeting caring needs can be challenging for families of people with a disability as their health conditions are more likely to be complex, and care is more likely to be needed long-term. Available time and the unpredictability of caring demands provides a challenge for carers to participate in labour force. While informal care giving is needed and the carers may value providing care, listening to carers needs and providing support may enable the carer’s to fully participate in society both in terms of work and leisure.

For people with profound or severe disability under 65 who lived in the NDIS available areas, the study found that they were less likely to use formal services in the last 12 months before the survey than comparable people with disability living in the NDIS unavailable areas. For their carers, there were no changes regarding the caring hours and the probabilities of getting employed, however, primary carers with recipients living in the NDIS available areas were less likely to participate in social events such as going to a concert or museum or sport.

While the unchanged caring hours may due to the extra time needed to arrange NDIS funded services, the study has raised an important concern about the equity of disability policies. Those “NDIS ineligible” people with a severe or profound disability who are not able to access the scheme may have been disadvantaged. For instance, people with mental health problems whose condition may be episodic rather than not long-term may not qualify for the NDIS but still require care. In addition, the evidence required to obtain access to the NDIS is not particularly clear and some people, for example, those who come from a culturally or linguistically diverse background may have less understanding of the system and be less able to advocate for themselves. While aiming to provide appropriate services to the people on the NDIS, it is also critical to consider how to best assist the people who are on the margin of NDIS access and their carers. 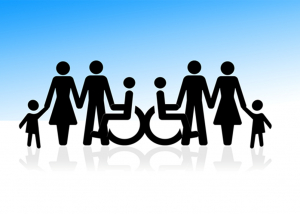 Photo by Gerd Altmann on Pixabay