The following is a summary of a research project by the authors. For more information please see the published full-text journal article: https://doi.org/10.1016/j.socscimed.2021.113886

GP subscribing patterns differ by gender with male GPs adopting new drugs faster than female GPs. However, when examining the monthly volume of prescriptions after the GPs prescribes them for the first time, there is no gender gap. Why the discrepancy and why does it matter? Dr Susan Méndez and her colleagues from the Melbourne Institute examine how gender differences in doctor’s behaviours, practice styles, and their working environment can lead to differences in decision-making. (LINK to summary page)

Healthcare decisions can be shaped by our approaches to gender. This research sets out to explore the role of Australian general practitioners (GPs) in the adoption of novel oral anticoagulants, which are commonly used to prevent strokes. To study GPs prescribing decisions, detailed data from the Medicine in Australia: Balancing Employment and Life (MABEL) panel survey of Australian doctors from 2013 was linked to administrative prescribing data from the Australian Pharmaceutical Benefit Scheme (PBS) and the Medicare Benefits Schedule (MBS) from 2012-2015.

The study found a relatively large gender difference in the speed of adoption, with male GPs adopting new drugs faster than female GPs. A fast uptake of new technologies is usually a desirable target, but effectiveness supporting new drug approval is often shown for specific patients in the trials and neglects certain populations. Instead of measuring adoption by speed, appropriate population targeting should be a more suitable goal in this case. Alternatively, adoption can be measured by its intensive margin, i.e. rather than looking at how quickly they adopt new anticoagulants, the monthly volume of prescriptions after the GPs prescribes them for the first time was measured and here there was no gender gap in adoption.

The speed of adoption might be determined more by working patterns. Female doctors tend to work part-time and in smaller practices and dedicate more time to each patient. But even after adjusting for these and a much richer set of doctor characteristics, including personality traits and risk tendencies, there is still a large gender difference in the speed of adoption. Potential mechanisms that could explain the observed gender gaps could be differences in access to information, peer networks and other inputs in medicine. For example, there is evidence that doctors prefer to refer their patients to doctors of their same gender and in Australia only 12.5% of cardiologist are female.

Understanding this gender gap is important if it reflects inequity in the medical workforce, especially in primary healthcare, which is the first point of contact in a patient health journey. 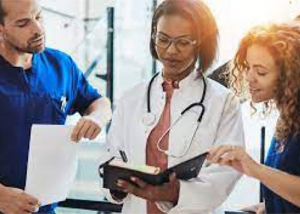