The following is a summary of a research project by the authors. For more information please see the published journal article: https://doi.org/10.1016/j.ehb.2020.100933

a   School of Economics, The University of Queensland, Faculty of Business, Economics and Law, QLD, St Lucia 4072, Australia

b   Centre for the Business and Economics of Health, The University of Queensland, Faculty of Business, Economics and Law, QLD, St Lucia 4072, Australia

Study results show that regular physical activity among 54 to 75-year-olds has a significant protective effect on cognitive decline in older age and may hence be a successful protective action for dementia. Dementia is the second leading cause of death in Australia characterised by a depreciation in cognitive function, primarily affecting older people. It impacts the ability to perform everyday activities and is a major cause of disease and disability in the aging population estimated to cost Australia more than $15 billion in 2018, making it the third leading cause of disability burden overall. Sabrina Lenzen, a PhD candidate from the School of Economics and Centre for the Business and Economics of Health at the University of Queensland, supervised by Professor Brenda Gannon and Dr Christiern Rose, used linked data for her research and a summary of their study can be found here.

It is estimated that currently 472,000 Australians are living with dementia and its prevalence is expected to increase to 1,076,00 by 2058. Since so far, no cure for dementia or therapies exist to alter its progressive course, there is a critical need to identify potential preventive health strategies.

In the study, biannual data from the Survey of Health, Ageing and Retirement in Europe was used, consisting of 16,700 people between the ages 54 and 75 over a 13-year period from 2004 until 2017. In the analysis, factors controlled for included people’s socio-economic characteristics, health measures and lifestyle factors. Measuring individual changes over time allowed for the identification of a value close to the direct impact of physical activity on cognition.

This profound effect emphasizes the need for investment that increases physical activity participation among older people. Overall, preventing dementia will decrease the burden on individuals, the health care system and the economy significantly and thus implementing evidence- based interventions for reducing modifiable risk factors of dementia, such as physical inactivity, is crucial. Spending more money on public health campaigns and financing tailored physical activity programs through e.g. Medicare may reduce overall health care costs and can ultimately also lead to prolong participation of older adults in the labour force, thus enhancing the economy. Especially now, in times of a global pandemic, this topic is more relevant than ever. Older adults are spending more time isolated and without much social interaction, which is a key risk factor for developing dementia. Increasing physical activity participation could play an important role in preventing the onset of dementia. 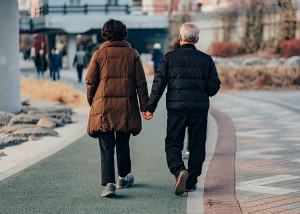 Photo by Daniel Bernard on Unsplash