The following is a summary of a research project by the authors. For more information please see the published full-text journal article:

Economic thinking is increasingly employed across most areas of government activity. The continuing rise of economics across central governments around the world has a potentially important role to play in how countries and international organisations think and operate. However, there is very little research on what professional economists in government actually do. As professional economists play an important role in government, better knowledge of what they do might help to identify training gaps, and may have implications for the content of economics degree courses. In a recent HERC study, in collaboration with the Open University and Birkbeck College, we sought to improve our understanding of the role of economists in UK government. In the study, published in the International Journal of Public Administration, we surveyed over 500 members of the UK Government Economic Service, and used the results to shed light on the activities and thinking of practitioners. The study found that government economists use a range of concepts and tools that have been developed throughout the subject’s history. Mainstream neo-classical ideas are still valuable to professional practitioners, but they are increasingly used alongside newer fields of economics, such as behavioural economics – particularly ‘nudge’ theory. While mainstream economics has the feeling of a single paradigm, professional practice draws on it in conjunction with other competing paradigms. A key finding was that the portfolio of tasks that economists in government undertake is not necessarily well reflected in university curricula. For example, ‘synthesising evidence’ was reported as being the single most widely performed task in government. This gives rise to concerns that standard economic educational training, where quantitative skills are generally prioritised, may not provide government professionals with sufficient training for some of their most important economics-related job tasks. Hopefully our paper will help to stimulate further scrutiny of ways in which economic thinking shapes the world, and how this process can be improved. 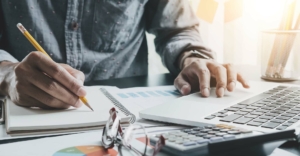