The following is a summary of a research project by the authors. For more information please contact Dr Ou Yang at the University of Melbourne Ou Yang (email: ou.yang@unimelb.edu.au )

Alcohol is consumed in a range of different beverage types. Whilst most people agree a tax on alcohol is a legitimate government intervention, details regarding which beverages should be taxed and by how much vary across countries and has been the focus of much debate. If the rationale is to tax proportionally to any negative consequences that occur as a result of alcohol consumption, alcohol tax should be targeted at those who drive the majority of negative outcomes from alcohol consumption, rather than all consumers.

A general alcohol tax would reduce consumption for both groups. An alternative approach is to examine the association of negative outcomes with different alcohol beverage types. A tax policy that taxes the products that are more likely to be associated with negative outcomes or consumed by individuals involved in risky and abusive alcohol related behaviours would be more effective.

Alcohol taxation in Australia has long been the centre of debate among health professionals, welfare bodies, grape growers, and beer, wine and spirit producers. Australia has a complex alcohol tax system where beer and spirits are taxed by differentiated volumetric excise rates according to alcohol strength and wine is levied an ad valorem WET (wine equalisation tax) based on wholesale value. 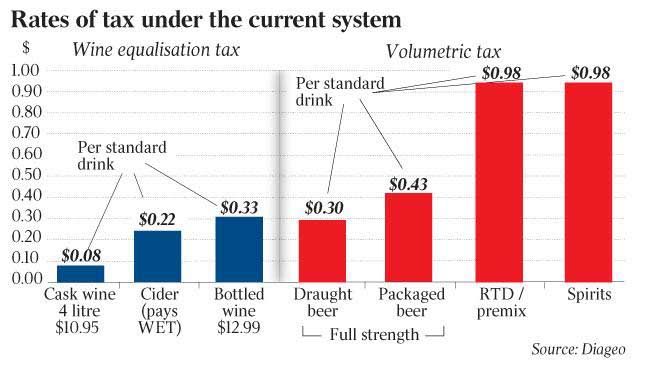 The spirit industry has long pushed for the “equal alcohol, equal tax” argument, while the wine industry emphasises its contribution in the vitality and employment in the Australian agricultural industry and benefits to other sectors such as tourism. In a comprehensive review of the Australian tax system, namely the ‘Henry Review”, a change to a flat rate volumetric tax system across all alcohol beverages has been advocated. In support of such a volumetric tax system, the Australian National Preventative Health Task Force highlighted the need to encourage the production and consumption of low-alcohol products. These all seem to endorse the “equal alcohol, equal tax” argument regardless of product types, and to associate the degree of negative outcomes with the volume of alcohol in a product

Our study, as opposed to generally treating alcohol as an aggregated product as has been done previously, examines the association of alcohol-related antisocial and unlawful behaviours with 9 specific alcoholic beverage types preferred by individual respondents (regular strength beer, mid-strength beer, low-strength beer, cask wine, bottled wine, fortified wine, pre-mixed spirits in a can, pre-mixed spirits in a bottle and bottled spirits and liqueurs). The data we use in this study are drawn from the latest 2004, 2007, 2010 and 2013 waves of the Australian National Drug Strategy Household Survey, involving 103,304 individuals. In this paper, we focused on the following antisocial and unlawful behaviours while under the influence of alcohol: “Drove a motor vehicle”, “Created a public disturbance or nuisance”, “Caused damage to property”, “Stole money, goods or property”, “Verbally abused someone” and “Physically abused someone”. For practical purposes, we further categorised the activities into two groups: Driving (drove a motor vehicle), Disturbance (created a public disturbance/nuisance; caused damage to property; stole money, goods or property; verbally or physically abused someone). To study the association between alcohol-related antisocial behaviours and consumers’ drinking preferences, a system of probit equations with a triangular endogenous structure was respectively specified to model the two outcome variables.