Are you Okay? The effect of a national peer-to-peer support campaign on mental well-being and suicide in Australia

Previous Next
Are you Okay? The effect of a national peer-to-peer support campaign on mental well-being and suicide in AustraliaLidia Engel2022-12-02T10:54:13+11:00

This column reports on the preliminary findings of an ongoing project.

About 1 billion people worldwide live with a mental disorder, making it the leading cause of healthy years lost due to disability. Correspondingly, suicide is a leading cause of death, with over 700,000 suicide deaths each year. A prominent public health response to these alarming statistics has been the introduction of various mental health-related awareness programs. Though they differ in their implementation, such programs typically aim to raise awareness, reduce the stigma of mental health issues within the community, and rally support for mental health among governments and other healthcare funders. Examples include the WHO’s World Mental Health Day, held worldwide annually on 10 October, and Mental Illness Awareness Week in the U.S. every year during the first week of October.

The effectiveness of an extensive annual mental health campaign, “R U OK? Day”, an Australian mental health and suicide prevention campaign, was evaluated. Uniquely, this campaign promotes peer-to-peer mental health support by encouraging Australians: (i) to ask friends, colleagues, and neighbours “are you ok?”; (ii) to listen to responses with an open mind; (iii) to encourage action if needed, including encouraging people to visit a mental health professional; and (iv) to check back in with them over subsequent weeks. The campaign also provides education on how to complete these four steps.

Our empirical approach uses daily variations in self-reported mental health and suicide and accidental poisoning deaths before and after the annual campaign over nine years (2011-2019). We compare changes in years when the campaign was highly active with years when it was not. This difference-in-differences approach uncovers short-term behavioural changes (in the following month) that the peer-to-peer aspect of the campaign promotes and should not be interpreted to measure longer-run changes.

Keeping this in mind, we find no evidence of an effect on suicides or suicidal behaviours (such as Google searches regarding suicides or crisis helplines). However, we find that the campaign has a small positive effect on self-reported mental health. The positive mental health effect is driven mainly by men aged 25-49 and those living in economically disadvantaged areas. Preliminary findings demonstrate that campaigns that harness peer support may be an effective and low-cost way to improve mental well-being before individuals reach crisis point. 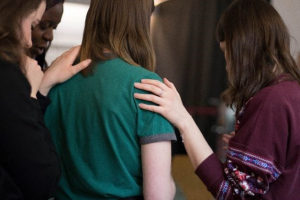 Photo by Rosie Sun on Unsplash